A group of Russians claim to have captured the best footage of bigfoot. 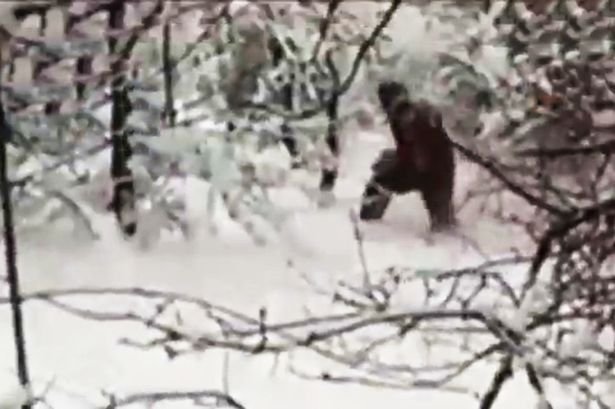 The people who filmed the footage spotted what they described as a hairy bear-sized humanoid that marched out of the woods before disappearing seconds later.

The recording came when a group of people from the city of Adygeisk set off in search of the mysterious creature after a local TV station reported that it had been sighted in a remote region.

They said they had questioned the people at a mountainside lodge who claimed to have seen the creature, and managed to get several independent confirmations that there was something out there.

Eyewitness Ludmila Hristoforova who spoke to local TV station said: “The creature was big, looking like a bear, but not a bear. From the door we’ve seen something big and shaggy.”

Homeowner Andrei Kazarian said: “I heard footsteps and we were pretty sure there was no one else around because we knew for sure everyone else was inside the house. Although we didn’t see anyone, we saw its huge footprints.

“They were 5 to 6 centimetres deep and couldn’t come from a human foot. We took a plaster cast of them and we estimate that it probably would have taken about 200 kilos to press the snow down that much.”

The local team then set off to investigate, and as they headed off into the forest said they were stunned when they heard the crunching of snow, and managed to grab footage of a hairy creature as it emerged from the trees.

After taking a plaster cast of the alleged footprint, the group have now handed their findings to local scientists for analysis.

The footage has already attracted a lot of interest with some suggesting it was just a stunt to bring in tourists, and others convinced that this was the first form of conclusive proof that the yeti exists in the area.

We at On the Odd are waiting to see if more footage pops up before putting our opinions out there.